During last weeks FA Cup tie we struggled to come to terms with the variances of the artificial pitch, this week however we had no such trouble as we opened the scoring in the 1st minute. Elliott Simpson finishing off our very first attack from close in. Just the start we were looking for.

The goal settled us and we took control of the game, our hosts however were still looking dangerous with their quick breakout attacks and, it was from one of these attacks, in the 27th minute, that “The Lane” levelled the game when their No 8 headed home from a free kick.

It was starting to look as though we would go into the break on even terms when a long throw from Sam Merson wasn’t dealt with by the Rayners defence, the ball bounced loose in the box and Michael Kamara reacted first, prodding the ball home and giving us the lead at the break.

The Boss made a couple of changes during the break, Scottie Walker and Bruno Tingle replacing Sami Gagna and goal scorer Elliott Simpson.

Once again we started the half in control, and it wasn’t too long before we increased our lead through Bruno Tingle who used his height to great effect, scoring with a tremendous header. The goal seemed to deflate our opposition and when, in the 58th minute, Sam Merson scored what is becoming his customary goal, the tie was over and done with.

Rayners scored a consolation, through Jamie McKay, just before the final whistle. This was a commendable effort by The Lane, especially as this was their first competitive game of the season, and we wish them well for the upcoming season. 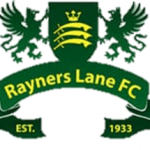